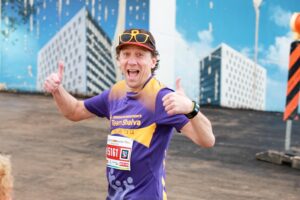 For the past two years Mike Ritz has been one of the coaches of the HSS Run Club, a corporate wellness program that Empire runs for the employees of the Hospital for Special Surgery. Mike first got involved with Empire Tri Club in the winter of 2015 when he was leading a 12-week winter training session, preparing athletes for the NYC Half Marathon.

Where did you grow up?
I grew up in Syosset, NY, a small town on the North Shore of Long Island. I am one of four boys, and we were all pretty active in sports growing up. My first sport was soccer because my mother’s family is all immigrants, and I played lots of baseball too. I was pretty much up for anything as a kid.  I was a small kid growing up but always practiced and tried to out work everyone else.

Why did you start running?
I got into running through soccer. In high school, the cross-country coach came out to watch one of our soccer games and spoke to me after the game. He asked me to join the team at a cross-country meet the next day. My soccer coach gave me permission. I remember that I was angry because I was missing soccer practice. I ran the meet in my regular Converse gym sneakers and came in second on our team, 5th overall. So I continued to run cross-country while playing on the soccer team. My older brother was a pretty accomplished runner so it was fun for me to follow in his foot steps. Honestly though, I hated running back then, because I felt like I was missing out on playing ball!

My senior year at Boston University, my friend and I decided to run the Boston Marathon, which runs right past our campus. I actually went to the Bill Rodgers Running Store to interview Bill Rodgers (Olympian and 2x Boston & NYC Marathon Winner) and ask him for some training tips. Remarkably, he was there, and more remarkably, he spoke to me.

In addition to marathons and half marathons, I have done a couple of duathlons, but the notion of a triathlon really scared me because of the swimming (yikes!).  One of my cousins, who is not a good athlete, decided to do the NYC Triathlon and dared me to do it as well. Challenge accepted. That was 2010. Since then I’ve done a few Half Ironman’s.

What is the scariest thing to happen to you during a race?
I try to do a “destination” run each year. Combining running and vacation is a great thing. The scariest thing that ever happened was the Tel Aviv Marathon. It was crazy hot and my son was meeting me at the finish line. I guess the heat got to me because I don’t remember finishing the race. The first thing I remember was walking with him, drinking water from a bottle. I remember asking him “Did I finish?” and he looked at me like I was crazy and pointed to my medal. It was already 20 minutes after the race, but obviously I was in a complete heat-induced fog.

What is the funniest thing you experienced during a race?
I ran the Florida Half Marathon a few years ago, which features a different musical act at each mile. I think I was the 10-mile mark and feeling pretty crappy, but as I approached I heard this great, kick-ass band playing some classic rock ‘n roll. I looked at the drummer and made some feeble motion to indicate that I wanted to sit in on the drums. He happily waved me over. One Rolling Stones song later, I was on my way, with renewed energy to finish the race!

How have you been involved during the COVID-19 pandemic?
I’ve lived in NYC since I graduated college. A while back, a relative suffered a heart attack on the street and was saved because of the fast response of the EMTs. So I decided to be an EMT and have served in various volunteer ambulance services since. I was a first responder and survivor on 9/11, when I ran with my medical gear from my apartment in Greenwich Village to the Twin Towers. My office at the time was in the South Tower (the second to be hit). I was going to a meeting that morning, so I wasn’t at work, but I called my office and told everyone to leave immediately. Even though there were announcements to stay, I insisted that everyone exit the building. They all survived and I am proud of that. When the first tower fell, I remember looking up in fear and thinking “there’s no way I’m getting out of this.” I grabbed a backboard for protection and started running before I was consumed by the thick, black smoke and debris. I managed to find a safe place and pulled other people in. I guess running prepared me for that moment. I survived the second tower collapse as well and stayed on site until 3am helping with the rescue and recovery efforts. I volunteered at Ground Zero for two weeks after that.

The COVID-19 crisis has brought back many thoughts of those days. As an EMT, I was part of some planning calls and meetings and worked at the Javits Center to help set it up as a hospital. Unfortunately, they didn’t let me continue working there because I am over 50 years old and they didn’t want to put me at risk. However, there has been so much to do within our building and local area. I work in my Hell’s Kitchen neighborhood to help organize community outreach. I think the greatest challenge for so many people is the loneliness that results from sheltering in place. If nothing else, I tell people to reach out to neighbors and friends and loved ones. Just call to say hello or to see if they need anything from the store.