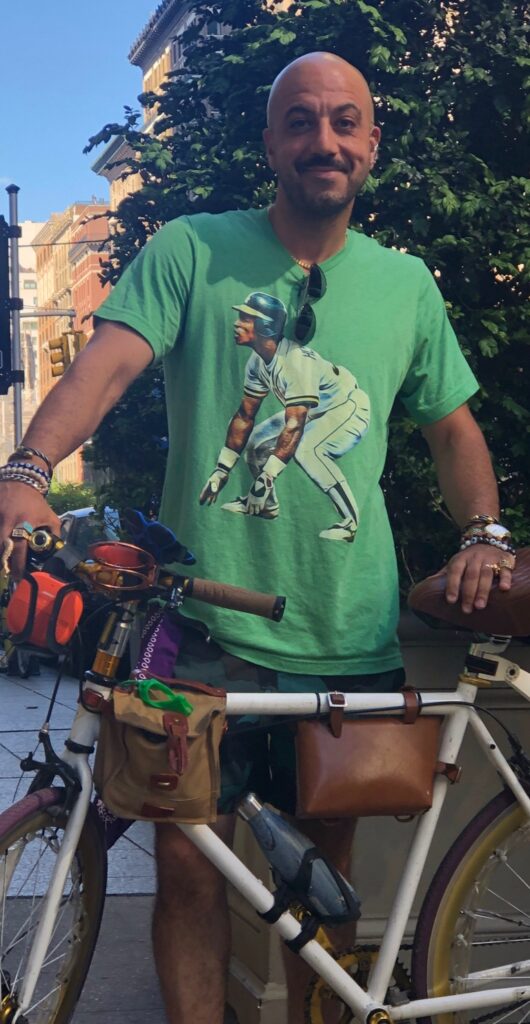 Wissam is one of the Empire Tri Club’s most recent additions to the Spring Beginner Program. He was born in Cairo, Egypt and raised in Jackson Heights, Queens, the most diverse zip code in the world. Roughly a square mile with 113,000 residents who speak 167 languages. Growing up in Jackson Heights attracted him to a career in human rights and civil rights later in life.

Tell us a little about your family.

My mother and father operated a local veterinary clinic for 20 years in Queens. The clinic was located next door to Corona’s Parkside Restaurant, a famous Genovese mafia hangout.  Local mobsters would bring in their baby alligators for checkups.  They would play with the cats. Most of you have never seen a hitman cuddle with a kitten, but I have. As late as 2015, a checkup for your dog was $25. My parents were often were never paid fully for surgeries they performed. They never sent a collection notice in their lives. I’m proud of that.

My father, whom resembled a mad professor when wearing a lab coat, died from smoking related causes in 2016 after 10 months on various machines. Then my favorite Uncle died the next year. And right after his death, my mother became completely blind and lost her memory. Facing such daunting issues, my fiancee decided to leave for better weather in California. I had no choice but to go it alone, so I quit my job and took care of my mom for a couple of years. 55 million Americans are taking care of an elderly loved one with a disability, and I was one of them. On May 13th, 2020 my mom passed away.  My only surviving family member is a sister that lives in France.

Why did you choose Empire?

I joined because I understood the importance of surrounding yourself with a good peer group, especially a group of people I would consider to be role models in their own right. I find Empire to be motivational, educational, and helpful to be a part of as I train for a formal event for the first time. I can ask specific or general questions, and I think the collective experiences of my many coaches and teammates are the greatest benefit for a beginner like me.

What is your fitness background?

I’ve never been involved in organized fitness, unless eating ice cream finally becomes the Olympic event that we all feel it should be. As a matter of fact, I spent most of my life 20 to 50 pounds overweight. Things changed about a year ago. I wasn’t proud of my health. I began to integrate exercise into my daily routines, like commuting to work by bicycle. I have always felt most comfortable on a bike; but I am now enjoying running a lot more than I thought. I can’t swim all that well yet, but I have a Pinky and the Brain level plan to solve that problem, so let’s see.

What is a personal goal of yours?

I recently turned 42, and I have the opportunity to retire early, the result of years of good personal finance and eating cold noodles for dinner. I like the idea of traveling the world, training in Mallorca, and competing in events. Or I might rent an apartment in South Africa and play soccer with children across the street every single day. I don’t know. I can’t play soccer but maybe they’ll need a goalie. Americans are good goalies. I’m ok with either plan. I do know that training for events will be a central part of my life. I have already been to 60 some countries and 200 cities. In fact, I taught tourism and hospitality at a public high school for a year so I can probably help my teammates with travel advice.

At the aspirational level in the triathlon world, I saw Doc Golden’s speech on YouTube with a buddy of mine, and her vivid description of competing in a triathlon, has made the Ironman an official daydream of mine now. And look, it’s good to daydream. There’s not much else to do for me to do when I’m running up a hill on mile 6. So I’ll run my first tri and see where it takes me.

I was a United Nations civil affairs officer stationed in Kosovo in 2008 just prior to their declaration of independence. I was posted in a rural setting where there had been religious violence. I took a new route from my evening walk one day and ended up being chased by a massive bull. Or it could have been a really masculine looking cow, I don’t know. I could have sworn I saw horns. But it was fast! I didn’t want beef with the cow, so I ran as fast as I could. Apparently cows are able to smell blood despite being vegetarians. And I can confirm that running from something as bizarre as a cow happens only in slow-motion. Luckily, some of the local Roma kids saw me, and since 10-year-olds are always much braver than adults, they distracted the cow while I got to safety. The next day I went up the hill to thank the kids who helped me and they asked me if I was going to run again. I agreed and they ran with me every few days after that. I t was nice. Running with 10-year-olds in a recovering warzone after work was how I started, I guess.

Fun fact about you?

I’ve been known to have a lot of pretty cool jobs over the last 25 years. Right now, I currently teach child actors on movie sets and Broadway shows, so I often get to hang out in famous actors’ dressing rooms, like Joaquin Phoenix in the Joker or Forrest Whitaker in Godfather of Harlem. You’d be surprised to hear what Donnie Wahlberg has to say about curling.