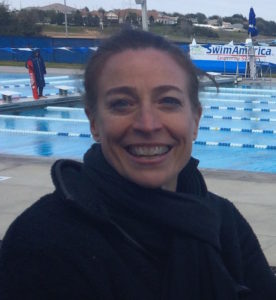 Marty, one of Empire Tri’s best swim coaches, has proclaimed that she suffered from “late-onset athleticism.” Growing up, she preferred books to going out to sweat in the school yard or participating on sports teams. A little over a decade ago Marty’s long time friend asked her to join her in a triathlon.

“A friend I’ve known since my teens wanted to do a tri for her birthday about 16 years ago and asked me to join her.  I discovered that triathlon isn’t just about swimming, biking and running: It’s about managing your mind, your energy, your goals, and your life.  And meeting some of the niftiest, most inspiring people ever. I fell for it, hard.”

To date, Marty has competed between 40 to 50 triathlons, ranging from sprint to 70.3s.

What else has she fallen for? Marty took up marathon swimming and just kept swimming! This past February she participated in a swim around Key West, Florida.  That’s about a half marathon to all you runners out there. This was just the start of her 2019 season.

Her big race this year was the Border Buster, a 25km swim from Vermont to Canada and back in Lake Memphremagogg. We asked Marty how she prepared for the swim:

“I had the benefit of having a friend who was doing the same race.  One of the best moments of preparing for Border Buster was a training swim we did — a swim race around Atlantic City Island.  Since Border Buster was only 2 weeks after Atlantic City, we split the 22.7-mile swim between the two of us.  It was fabulously epic, as marathon swims can be…We finished in a little over 10 hours, switching swimmers every hour.”

Regarding Border Buster race day:
“I was worried about being chilly — it was a 5:30 AM start and hard to shed outer layers in the dark to “zinc up” — but when the sun came out, it was perfect.  People wonder how marathon swimmers can be in the water for so long (Border Buster took 10 hours and 41 minutes), but it’s really a mix of training, stubbornness, and acceptance.  You have to be stubborn enough to really want it and keep swimming and training through everything, but you also have to accept whatever the ocean, lake, or day gives you. What do I think about for that long? Everything and nothing, just like when you’re on a long run.”

Always up for trying new adventures, Marty has also been competing in Swim Run races, a sport were you switch back and forth from swimming and running a couple of times to get to the finish line.  It’s also a sport that you do with a partner.  You must be within 10 feet of each other throughout the race, so some teams tether themselves to help maintain the distance.  This summer Marty and her good friend Jen partnered up to compete in a Short Course Female Team, taking first place at both the Ignite Rhode Island Swim Run and Ignite Knoxville Swim Run.

Shortly after, she headed to Bermuda to help coach Empire Tri Club’s first annual Bermuda Swim Camp, a 5-day open water and pool swimming training camp, finishing off with the 4km Round the Sound swim.

She will finish her season participating in a fundraiser, The Great Relay by Trident Swim Foundation, this coming month.  The swim is a 5,000 yard relay where teams of swimmers compete to see which team can swim the fastest!

Coach Marty we are cheering for you to touch that wall as fast as you can!