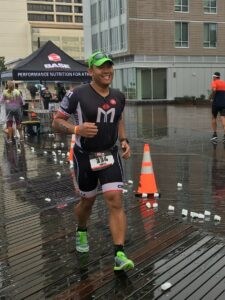 Amer started swimming at the age of 8.  This first sport in his athletic resume was not enough activity for him so in college he took up cycling.  Within a short period of time he completed his first century ride (a 100 mile bike ride).  He’d later find himself switching from one sport to the other.  However, the back and forth training was very demanding and tiresome.  To stay motivated, he challenged himself to combine both sports and add a third to his active lifestyle.

“I wanted to do triathlon because doing one sport at a time wasn’t working; and led to burnouts.”
Amer’s burnouts have not returned since starting triathlons.  He believes this is due in-part to joining the club and a masters swim team.

“Before, my workouts were solo and I didn’t know many people who were into doing what I did.  I’m more motivated when I’m with other people.  It helps when peers relate to what you do and how you feel.”

This past winter Amer had a demanding training regimen in preparation for racing his first marathon in March, followed by an Ironman 70.3 in May.  His first marathon was cold and had rolling hills, and he used the race to gauge what he could accomplish. Running 26.2 miles is one of them!

The 70.3 was a fun course for him.  Having calm nerves throughout the race helped him power through as he struggled with his ankle. Prior to race day he had been experiencing issues with his ankle, making long runs hard for him to do.  Even though the run portion was spent running/walking, Amer crossed the finish line satisfied with his performance.

Amer is admired by his Empire Tri teammates. He is always there to help out or give advise to those just starting out in the sport.

“Amer is an amazing swimmer and coach. Whenever we swim together he’s always happy to look at my form and technique, pointing out areas I can improve and giving some useful tips.”- Sid Madhav (Empire Tri Club Member)