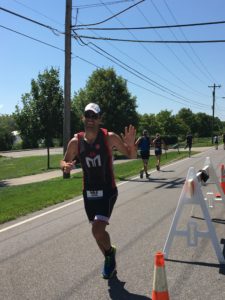 Pete has been a long-distance runner for the past 10 years, running 18 marathons to date!  He finds long training runs therapeutic, but recently turned to triathlon as a way to “mix it up” and integrate the lower-impact sports swimming and biking into his training to reduce the risk of injury.  It took him a couple of triathlons before he found Empire, where he now trains with teammates and really enjoys it!

Last month Pete competed in IRONMAN 70.3 Ohio, finishing with a 22-minute Personal Record.  He started training for this race last winter by correcting his swim stroke and developing bike strength and endurance.  “That base paid huge dividends as the weather improved and tri season began.  Ohio 70.3 ended up being the culmination of the whole season for me, where all my training and lessons learned from previous races really came together.”

Pete was set to compete at IRONMAN 70.3 Lake Placid. However, when a visit from his Australian family on race weekend meant backing out of the race, he decided to compete in Ohio 70.3 instead.  We asked him how it was for him on race day:

“I always get butterflies on race day.  But a huge mental benefit was pulling on my Empire kit, which reminded me of my teammates back home and all the support I had from them.  And staying with Empire buddy Cam Smith was especially amazing; the support and encouragement from him and his family (the race was in his hometown) were truly incredible.”

“The Ohio course is known to be fast, but not without its challenges: a bit of a current, headwind, and some deceptive hills on the run.  I decided to just trust my training, race by feel, ignore all the data, and try to have fun on what was a beautiful summer day.  I hydrated and fueled smartly on the bike, hard lessons learned after doing both of those things poorly in previous races.”

Pete found this season to have been incredibly rewarding so far, especially with his new PR!  Although tri season is over for Pete, he will join some of his Empire Tri teammates at both the Chicago and NYC Marathons later this fall. Good luck Pete!