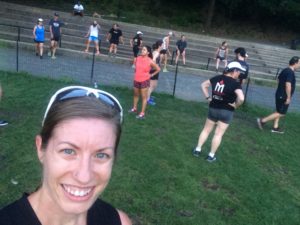 Workouts for the week

Wednesday: Bike in the morning, swim at night

Thursday: Strength training in the morning, run in the evening

Well, it finally happened.  That moment we all fear while on our bikes.  No, I wasn’t hit by anyone/thing (thank goodness – *knocks on wood*).  I got my first flat tire!  It was bound to happen sooner or later and I always try and look at the bright side of things, so I’m glad that it happened now, during a long training ride rather than during race day.

I was on my way to Nyack Beach and was under the Tapan Zee bridge when it happened – honestly, I don’t really remember hearing a loud pop or anything, but I do remember the road being super bumpy and full of potholes from the construction.  A few seconds later I hear what sounded like something was stuck in my breaks – so I pulled over to check it out and low and behold – flat tire.

My first thought? Sh*t.  My second thought?  I’ve never actually changed a tire before, I don’t know how to do this. My third thought (well, okay it was more like a little pep talk to myself)?  Lauren, you’ve had those bike maintenance clinics with Empire and you are a smart person, you can figure this out and get it done! I also told myself I was going to try and do as much of this as possible without having to use YouTube, haha.

I should also preface this by saying, I’m a morning person.  So much so, that if it was up to me I’d be out for my long ride at 5:00 am; but I’m at the mercy of the GWB gates only being opened at 6:00 am, so I’m on my bike and headed out for my long ride at 6:00 am.  Mainly because going over the GWB still scares me, so the earlier I can go and the less people on there, the better.  I also like going earlier so I can be done earlier and still have the rest of my day to get things done and spend time with my boyfriend.

Howard (Voletsky, fellow ETC teammate) usually joins me for my long rides but he was away this weekend, so I was riding solo.  So, here I was standing on the side of the road in Nyack at 7:30 in the morning with a flat tire on my bike, no other riders that I had passed and knew would be coming my way eventually, and only about 50% confidence that I knew what to do to change it. But you know what, sometimes you just need to be thrown into the fire to figure out what to do – and that’s exactly what I did.

I won’t give you all every single detail of my tire changing adventure, but I will say that about 5 minutes in, another rider, by the name of Al, came by, stopped and asked if I was ok and/or needed help.  I told him I was pretty sure I was okay, but that this was my first time doing this and, without hesitation, Al got off his bike and helped me finish up.

As we were changing my tire and chatting he asked what I did for a living, so I told him I was a yogi and worked for a company that manages yoga teachers business.  To which he said “No wonder you were so calm about everything when I came by”.  I admitted to him that I did have a few moments of panic and worry, but after a few deep breaths I knew there wasn’t anything I could do except be proactive about the circumstances I was in.  Sure enough, after a few minutes I was back in the saddle and continuing on my ride.  I know I would have been able to do it my own, but it probably would have taken me twice as long, so THANK YOU AL for stopping to help me.

So, moral of the story – Sh*t happens.  And most of the time being angry or panicking about it, isn’t going to help. Take a few deep breaths to calm you down, get your senses back in order and your thinking cap turned on, and trust you know what to do.  And go to bike maintenance/tire changing clinics!  I also now vow to ask every rider I see on the side of the road changing a tire if they are okay and/or need help – because you never know who might!