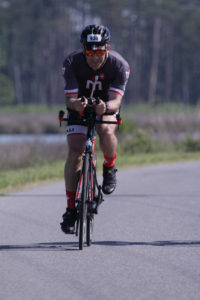 Growing up in Europe where soccer is one of the main sports played in school, Sam did not have a lot of options for athletic participation.  “I was never very interested in soccer but I did play basketball for a few years.  It’s safe to say that no one ever thought of me as an athlete before now”.

Sam has come a long way from his school days.  He began cycling a few years ago but that wasn’t enough for him.  Needing a new challenge and talking to friends who were triathletes he decided to join Empire Tri Club’s 12-week Beginner Program.  After competing in the program’s Sprint distance triathlon, he caught the “tri-bug” and registered for his first Olympic distance triathlon, the NYC Tri the following year.

Sam’s training has certainly been paying off!  He has set new personal records at each race he’s competed in this year!  All of this hard work got him to the start line for IRONMAN 70.3 Eagleman earlier this June.  This is the longest distance triathlon he’s competed in to date and has plans to continue racing longer distance tri’s.  He will be joining his fellow Empire Tri teammates at the inaugural IRONMAN 70.3 Lake Placid this September.  He also plans to run both the Chicago and New York City marathons this year.

“Sam is an awesome training buddy and a perfect example of what makes being a member of Empire so great.  He is always friendly and disciplined in his training.  Knowing that I’d see his smiling face made our swim, bike, and run workouts fun and something to look forward to.  And I could always count on Sam for extra layers, waffles, spare tires, and CO2 cartridges – he’s a mobile bike shop!” – Pete Lambousis