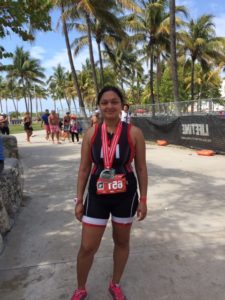 Having a few marathons under her belt, Mona decided to try triathlons as the next challenge in her life.  Gaining a spot for the Panasonic NYC Triathlon in 2016, she joined Empire to help her train.

“Until last year, I hadn’t ridden a bike in almost 2 decades.  I was also a terrible swimmer.  In fact, as a child, I kept failing the beginner swim classes! I hoped that by doing triathlons, I’d get over any fears of swimming in open water.”

“Training for a triathlon is more interesting than just running.  Each day is a different workout.  If I get bored with running, it’s nice to mix it up and do other workouts.  I feel it’s also better on the body and once I started swimming and cycling more, I noticed my running pace had improved.”

Mona ran the Virgin London Marathon this past April and got a personal record by 33 minutes!

“Since joining the team my running pace has improved tremendously.  It’s still not considered fast and I’m always in the back of the group during our group runs.  When I think of how far I’ve come in the last couple of years, it makes me feel confident that in time, I’ll get faster and stronger with swimming and cycling as well.”

Mona is gearing up this summer to complete her first Half IRONMAN at the inaugural IRONMAN 70.3 Lake Placid in September.

“My main goal is to train as best as I can and just finish.  I will be training all summer and I like that I will be doing it with Empire!”