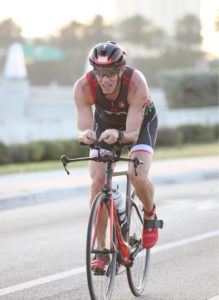 In March, he competed in his first triathlon of the season the Monterey Gatorade Race for Team Mexico.  He came home with 2nd place AG win!  It took a lot of self-discipline to prepare for the race, working out through the winter months and holiday season!  His willpower didn’t stop there, the race course wasn’t inspiring having to swim in a man-made lake, loops upon loops on the bike and again on the run.  All made worse by the non-stop rain throughout the entire race!

The race is a qualifier for the Mexican National Team.  The top two people in each age group qualify for a slot.  The win gave Harry a trip to this summer’s 2017 World Championships in Rotterdam, Netherlands.

His resolute mentality is evident in his coaching:
“Harry always pushes you just beyond your comfort zone. Triathlon training is hard enough, and just when you think you have no more left in you. Harry “suggests” you may have another lap or some more speed to spare…he’s usually right!” – Yael Bartur