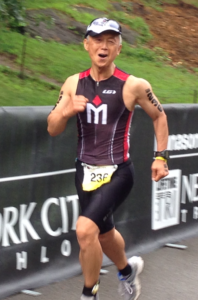 Larry had a very limited athletic background and was a self-proclaimed couch potato! He wrestled and played some basketball in high school but his only exercise since then was to walk 18 holes of golf every once in awhile.

In 2012, and not so sure of his decision as to why, he ran his first marathon in NYC.

“I enjoyed the atmosphere as a spectator and thought it was a great event. The real reason was probably that I was turning 53 that year and was beginning to feel my age and my mortality. I then saw an ad for the NYC Triathlon and thought it might be interesting, although I knew almost nothing about triathlons. I went out and bought a bike and had to learn how to swim properly. That’s when I found Empire and signed up for the Beginner’s Program. I enjoyed the training and the fellowship and now I’m hooked.”

This year he will be competing in his 4th NYC Triathlon and 4th NYC Marathon.  In addition to his second Half IRONMAN in Lake Placid and his second NYRR 60K race!

“My goal is to do a little better with each race but really just to stay fit and healthy while enjoying the training and the company of my teammates at Empire. I’m only two years away from turning 60 but, as long as I stay healthy, I plan to continue to participate in triathlons and marathons.

It occurs to me that triathlons are basically what I did as a kid growing up. Every day in the summer, I’d get up, ride my bike down to the park with my friends, run a few miles playing basketball, then ride to the lake to splash and float around before riding home for dinner. I guess I’m just back to being a kid again.”