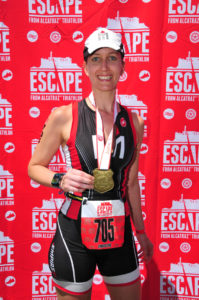 Those were Christine’s thoughts as she prepared for the Escape from Alcatraz triathlon- an iconic race that starts by jumping off a ferry into the frigid waters in the San Fransisco Bay and swimming from Alcatraz Island to the main land.

“I was very anxious on the ferry waiting to jump and just kept telling myself, there’s only one way back to shore and we’re gonna do this! Seriously! Soon! Ok, now…JUMP! Once in the water the nerves go away, and you have a job to do, get to shore!”

The 1.5 mile swim is notorious for having a strong current and rough, choppy waters – hence why the maximum security federal prison was once believed to be unescapable. “I did what I needed to survive it; freestyle, breast stroke, back stroke, my own made up stroke… it all came into play! The bike course was hilly. The crowds were amazing. The other triathletes were fun to chat with. The run was my favorite part of the course. I walked when I needed to but overall just took in the scenery and had fun! That’s what this is all about, having fun!”

This is Christine’s 4th season competing in triathlons. On a hot July day back in 2014, Christine was in Central Park as the NYC Triathlon was under way. She spectated and cheered on the athletes. She saw a woman walking and looking like she was having a tough time so she cheered her on. Christine went to the finish line to see what it was like. After watching the finishers for a while, she saw that same woman coming down towards the finish line with tears down her face and her arms in the air. She had done it! That day Christine said to herself, “I want that feeling!” and so began her triathlon journey!

Christine decided to join the beginner tri program to help train for her first sprint triathlon. “When I started this journey I was always worried about not being the fastest, not being the best, and about coming in last. Triathlon has taught me to be comfortable with being uncomfortable. The sense of accomplishment at the finish line is worth it! I have made so many friends through this sport and love how we cheer each other on, push each other to do our best, and celebrate each other’s successes! I also love that what you once thought was impossible becomes possible whether it’s your first 5k or an Ironman. This sport makes me realize I can do it!”

The season is not over and she’s got a plate full of races including the NYC Marathon in November. Sandwiched in between those races she’ll be running down the aisle and getting married in August. Congrats and good luck Christine!