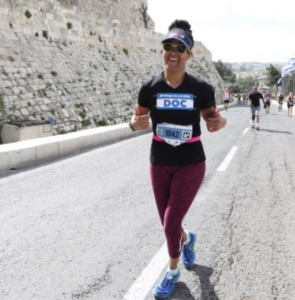 “l MUST do this!” were the words Doc said to herself after volunteering at a few triathlons.  She planned to race one triathlon, but after completing her first, she ended up doing another 5 before the end of the season!  That was three years ago.  Now, with over 20 races under her belt (including a half Ironman), Doc serves as an Ambassador for the Empire Tri Club and leads weekly workouts for the HSS Run Club.

While in the off season, many Empire Tri Club athletes keep themselves fit and motivated by competing in other athletic challenges.  In March, Doc traveled abroad to run the Jerusalem Winner Marathon.  Training in the cold NYC winter and having to pull 16-20 mile runs in 30 degree weather can be mentally tough.  “Once I got out there the training runs were great, but setting aside several hours on my off days to run in the cold never excited me.  The vision of accomplishing a dream goal kept me going every time.  And once each long run was done, I was on top of the world.”

And how was the marathon? Jerusalem is known to be a tough course due to its scenic rolling hills.  One also has to account for the difference in temperature from winter to summer which can also impact performance.

“I was surprisingly more terrified for this marathon than any other.  Even after doing the NYC marathon three times I was terrified of the hills of Jerusalem.  But after training through all those cold months, seeing thousands of people at the race who also trained made the journey worthwhile.  Crossing that finish line lit my spirit on fire.”

Now that triathlon season is under way Doc has a series of short distance running races and triathlons to keep her training strong.  Her “A race” this year is the Atlantic City Half Ironman which she will be competing in with more than 30 of her teammates.  Good luck this season Doc!