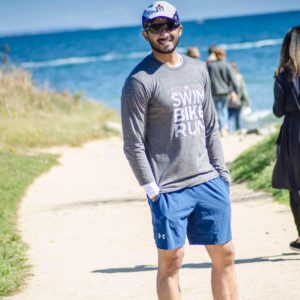 Sid grew up playing many sports in both high school and college. However, triathlon was never a sport that really intrigued Sid because he didn’t know how to swim. Nine months ago he decided to take swimming lessons. He followed those initial lessons up with Empire Tri Club’s Instructional Swim Classes and Open Water Swim Clinics. These he said, helped him gain confidence in the water.

“It was always very scary for me to even swim 50m in a pool. Now after a year of training, I realize the importance of mental strength and discipline in triathlons.”

Training for his first triathlon was nerve wracking and seemed daunting. Prior to race day, Sid had never run a competitive race. What got him through it was the assurance in himself that had been built throughout his training with the Beginner Program.

“After listening to some great advice from the club ambassadors and Ali, I just trusted the club’s training plan. I took every opportunity to attend team socials to ask questions and learn more about the sport from my Empire teammates. I also did not skip a training session. I think trusting the process and the work I put in made me confident by the time race day came about.”

The Beginner Program finished and race day came! Sid was pumped to get under way. His entire family traveled to the race site in Montauk, Long Island. He also had the support of his teammates which helped cheer him on to the end.

“The presence of so many Empire teammates was great. It really makes a huge difference when you have such a great support crew.”

When asked about the race itself, Sid shared his positive experience:

“The course was challenging and I exceeded my expectations. I learned a lot about how to pace myself during a race. In terms of nutrition, I did not try anything new during race day. I carried home cooked food to the race site, the same stuff I had been eating during training. That helped my performance. I also learned how important it is to consciously hydrate at regular intervals during the race and not just drink fluids when thirsty. Most importantly, I had a lot of fun during the race, even though it was tough. I hope to carry that feeling into the 2018 season.”

“I want to thank Empire Tri Club and all my teammates for being such a great source of inspiration and for sharing all your knowledge. The club has helped me push myself every day to be a better version of myself. Also, thanks to Saturday group rides, I’m now a fan of donuts/muffins after a long bike ride.”
We think you are pretty inspirational to us Sid! You’ve come so far and worked so hard to overcome your fear in the water. We look forward to seeing you accomplish many more goals this upcoming season.