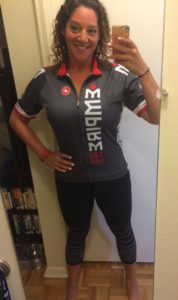 I never put much value into routine and always thought of myself as too spontaneous to really appreciate it. That seems to have changed! Being on vacation was everything a vacation should be, but it was NOT good for my workout routine. Sure, I could have been better about it- I had the time, the resources, but I lacked the motivation. I didn’t have my work out buddies around me, I was surrounded by all kinds of good foods that I don’t normally go near and I didn’t have my routine.

After talking with several Empire Buddies throughout the vacation and some more “exercise inclined” friends, I re-found my motivation. Went on a 9 mile bike ride (at a leisurely zone 2 pace) in 20 minutes and ran 3 miles (in 28 minutes) to an hour spin class! I had never felt better!! I’ve never been able to run 3 miles straight- I hadn’t been able to run 1 when I started! And now less than 2 months later I can do more than triple! I felt so good in fact, I signed up to do the LBI Tri on 9/18 as a practice race since it’s a little shorter (400m swim, 10 mile bike, 3 mile run) than Montauk it doesn’t count as my first Sprint. It’s also a great training terrain since it’s completely flat. Guess that bug really did bite!

I just keep thinking now how much more I can and should be doing but if the last year has shown me anything it’s that I can achieve it and will only get better! I am looking forward being back in the game now and ready for action.

Stay tuned for next week’s before and after reveal, marking 1 year since Rachael began her mental and physical transformation. We’re so proud of you, Rachael!