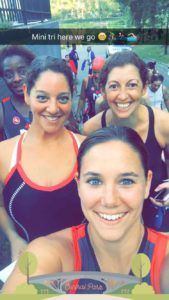 This week, as you would imagine most weeks to be at this point, consisted of a little bit of each swimming, biking and running – some with better results than others.

Thursday we did speed workouts at the secret track (I could tell you but then….). We jogged about a mile and a half up to the track (and back-which I that was a good enough work out) did our stretches and then paired off to start our 200m sprints. We were told to find someone around our same speed (which unfortunately for me there were no turtles around) but Yael was gracious enough to appreciate the extra time between her laps and partnered with me. We only had to do 5 laps but with the encouragement (and perhaps a little guilting) of the team I did 6. I’d have kept going if my knee didn’t start popping out at the end of each lap. It’s an old injury but certainly not one I want to upset now. I finished the 2ndlap in 50s which wasn’t nearly as fast as others, but again it’s not about them. Since the members were running it with us it helped push me to go faster (that and Alison running past telling me to keep it up!). After watching the Olympics that evening and seeing Usain Bolt win the gold in 19.78s, I felt pretty good about only being 30.22s slower and am considering it a win… for me; especially considering less than a year ago I would not have made it around the track at all! Harry led this drill and in his usual motivating way reminded me, “you’re in pretty good shape” which may have been the nicest thing anyone has ever said to me! Unbelievably (or perhaps not so implausibly) I heard a few things like that this week!

I’ve been trying to incorporate biking into a bit more of everyday life- both for the work out and to increase my comfort level around cycling through the city- which had been going very well. I was starting to feel like one of those bad ass bikers (yes, for the record you can be a bad ass in hot pink!) that cautiously hugged the side of the road. Friday, I was 2 blocks from home when a passenger decided to hop out of a cab… about 3 feet in front of me! Without enough time to stop, I plowed right into the door (thankfully not flying over the handlebars!) I will say everyone was very nice about it, passersby coming to my aid but it was still one of the scariest moments of my life. As I tested my limbs I found myself mostly ok- save a few scrapes, bumps and bruises (and a twisted handlebar). The Caliente lives on and so do I!   I supposed it was bound to happen at some point so hey at least that’s out of the way right??

Saturday (and Sunday) I decided to get my swim on! As part of the Empire beginner program we have a couple of swim coaching sessions that are much smaller groups than the open water swim so we were able to get more personal attention. Being the good Jersey girl I am, it was hard (gross understatement) to give up a summer weekend down the shore, but the prospect of improving my swim was too great to pass up, especially after realizing I wasn’t where I thought I was after the Open Water Swim. The coach, Tyrone, was fantastic!! He really got into the basic techniques and then told us personally how to improve based on where we were. I had thought I was killing it because I was moving faster than I thought I’d be able but he confirmed while I was the most “aggressive” swimmer I wasn’t the most efficient. He helped me identify a few things, that I’m continuing to work on, to be able to conserve the power I have and perfect my stroke (and probably more importantly my breathing). I’m so glad I attended this session to get such valuable “one on one” attention without ever being made to feel like a beginner.

One thing that remains, regardless of the activity, is the team comradery. As October 2nd draws nearer we are all (I think) finding the friendships forming and continuing to cheer each other on. I was even called “Skinny Rachael”, which for someone who’s always been heavier, I’d never expected to be called but MAN did it feel good!

I knew what I was signing up for, but I didn’t know just how much I would really be getting. I am already thankful for the experiences I’ve had and continue to look forward to the big day and each new milestone the journey brings!

Keep it up Rachael! We’re so proud of your journey and all the progress you’re making!