Meet Rachael.  Like many folks out there, doing a triathlon has been on her bucket list for many years.  And like many of us, life gets in the way, time gets short and excuses take priority over making a commitment to doing something for OURSELVES.  We’re excited to have Rachael on board, taking the plunge to do something out of her comfort zone to help better her mind, body and spirit.  We are honored to guide Rachael on her journey. So join us here and on social media, and follow along as we #trackhertraining to help prepare her to dominate the Mightyman Montauk Sprint Tri on October 2nd.  Let’s do this, Rachael! 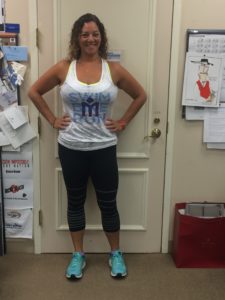 I officially start training for my first triathlon! I can’t believe this day is finally here- mainly because I’ve been talking about doing this for YEARS! Once upon a time I said I was going to do it before my 30th birthday… and now here we are with my 35th (EEEK) birthday just 3 weeks after the triathlon!

Yesterday, I picked up some gear- my Empire tech tee, hat, racing shirt and bib shorts (trust me I wanted everything but had to keep myself in check… for now anyway!). That’s when it hit me – this is really happening!! Luckily for me- I was greeted by Alison, Claudina and several other Empire staffers who introduced me to a couple of other beginners and really made me feel comfortable and confident- all the things I really needed! Everyone was so nice and helpful, they really pumped me up! Getting to meet a few other beginners before today’s run was great too because it helped remind me, I’m not the only one just starting out. I know you’re probably thinking “DUH! It’s a beginner’s program, of course you’re not the only one!”, but sometimes it’s hard remember that.

I’m so excited to be sharing my journey with you! Especially because it means I’m going to work that much harder to not let you down, or you know- be completely embarrassed! It may be helpful to know a little about me, so here goes. While I’ve always been (or wanted to be) “athletic”- running and cycling have never been “my thing”. I’ve always been overweight and this past September, I reached an all new “scary weight”. So I decided it was time to take action. I started doing all the right things- eating right, exercising, even stopped drinking during the week (and for those of you who enjoy a good happy hour or glass of wine after a hard day as much as I do, you know how killer this can be!).  So now I am down 60lbs and am the smallest and in the best shape I have ever been. That being said I’m far from being “in shape” or done shredding… and still not a real fan of running or cycling.  Though based on my interactions thus far- I think Empire might change all that!

The highlight, and extent, of my running career to date is that I have run 14 miles (read- a jog-walk, 4 years ago, with short breaks every mile and half). Left to my own thoughts for 4 hours (at least) I understood how people could love running. It became so much more a of a mental game than a physical one, even though I can assure you my body was more tired than my brain afterwards!

I have had friends throughout my life who love running, triathlons, Ironman Races, Toughest Mudders – you name it. They’ve all tried to get me into it but nothing seemed to make sense, until I heard about this beginners training program. Empire’s approach of bringing people who are all new to this and starting at the very beginning is what drew me in and the kind, encouraging nature of the trainers kept me.

While I am nervous- I am more excited to conquer (aka finish!) the Mighty Montauk Triathlon on October 2nd!  Stayed tuned for more updates on my progress and musings. Don’t hesitate to shoot over any questions you may have- in case you haven’t noticed- I’m pretty much an open book! J